How to Virtually Build T2 of Heathrow Airport 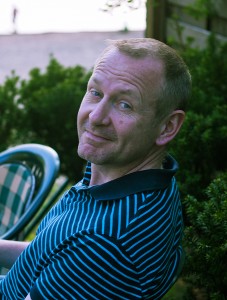 My name is Richard Green and my main work involves high end CGI and retouching for advertising and graphic design although I have also worked on film and TV productions when asked. My company is called Loop Corporation Ltd.  I generally work alone but have a few people I can trust to call on when I need help due to deadlines etc.  I often (as in this case) work with photographers mixing and matching elements as needed.  I know a lot of CGI artists take great pride in creating absolutely everything but I love photography and I never see the point of rendering something you could easily shoot.  I have also worked on quite a few animation and video post projects which I enjoy but the challenges of high resolution work are my main interest.

Maxwell in the Pipeline

In terms of pipeline I’m somewhat application agnostic for the most part.  When I started in 3D there wasn’t really one application on the Mac that excelled end to end so I would build in FormZ and render in Electric Image.  Consequently I’m happy to use whichever application gives me the results I want.  As the saying goes: when your only tool is a hammer, all your problems start to look like nails.  These days I like to build in Modo with trips to Moi3D or ZBrush for their specialities.  I prefer the scene building and animation layout of Cinema 4D which is definitely the hub for me. From there I will almost always render out to Maxwell which I have used since the pre-release of V1.

I understand photography so I found Maxwell very easy to learn and I like that I don’t need to switch on features like depth of field or caustics, they’re just on and not created as “tricks”.

Even when you go high on the f-stop to keep everything in sharp focus, there’s still a very pleasing falloff from your focal point that’s so much better than the razor sharp edges of many other engines.  It’s the only renderer I have used which surprises me in a good way.  I think we’re all used to waiting for a render to finish only to be a bit underwhelmed, I have had many occasions where I’ve been amazed by some lovely unexpected light detail from a Maxwell render.  For my final high res render I will usually render overnight on my own Mac, time permitting, possibly networked to a couple of others but I have also had good experiences with Rebus and Ranch renderfarms when in a crunch. 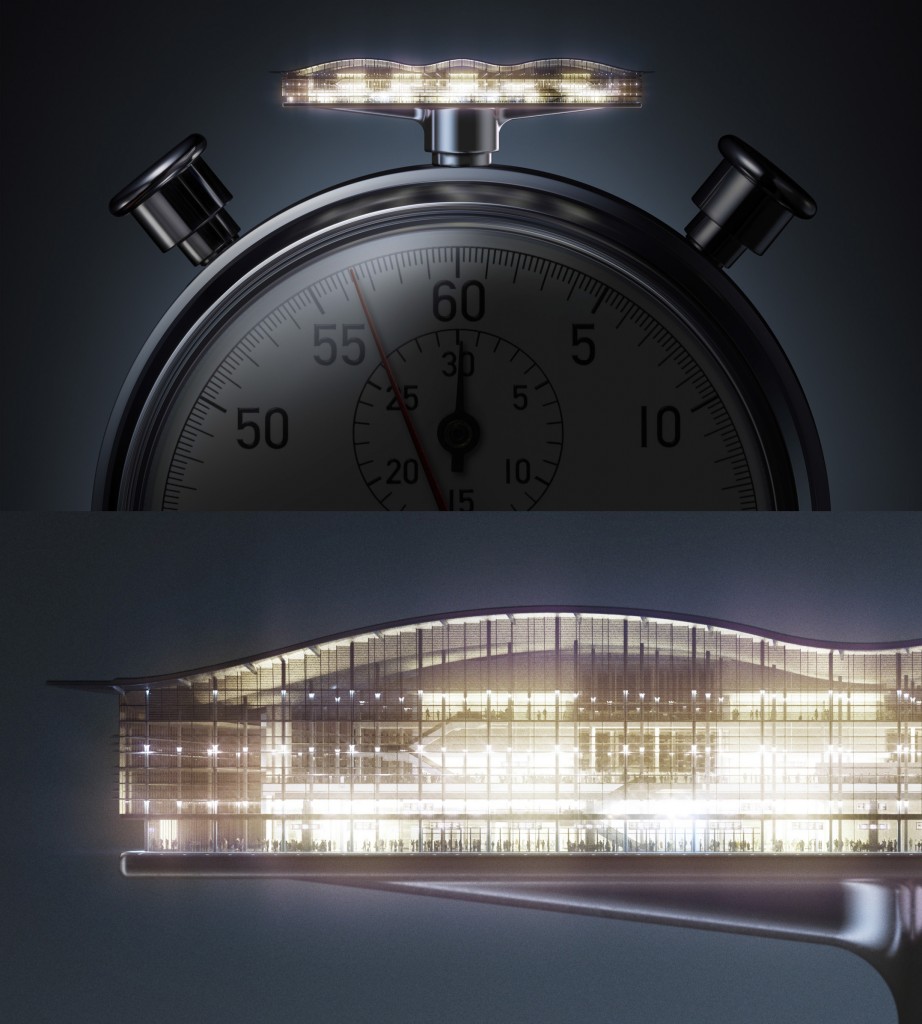 If possible, I like to be involved as early as possible in the creative process with my clients.  It’s best to plan an image with everybody involved so we can all discuss what the client wants to achieve, what we need in order to get there and any problems that we can foresee along the way.  Sometimes the photography leads and I’m supporting that, other times the CGI is the main element and I’ll often work with the photographer to previsualize the scene so we can work out where the camera needs to be to make everything sit together properly.  I will also gather HDR imagery on set if necessary and take any measurements needed to recreate any real world elements that I may need in my scene. 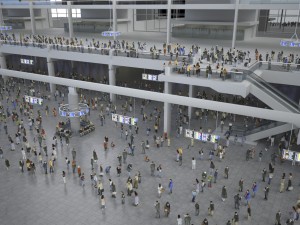 For this job, the creatives came with a very highly-finished visual and the stated intention to show a full size airport terminal on the button of a stopwatch.  They really liked Johanna Parkin’s photography and were keen to have her shoot the stopwatch and set the mood of the image, leaving me to create a representation of Heathrow Terminal 2 which was still under construction.

It wasn’t a standard architectural visualisation in that we didn’t have access to the building plans and actually the creatives didn’t want a slavish recreation of the building.

We looked through a lot of reference shots of the building under construction and publicly available visualisations of it and they cherry picked the elements they saw as making it distinctive.  Mainly the 3 humped roofline and the glass wall which is actually from another face of the building.  I started roughing out these shapes in Cinema 4D until we had a silhouette that they felt worked for our visual, then started to refine it and incorporate more of the real world details.

I purchased a generic airport model on Turbosquid that I could easily cannibalise for escalators and furniture to populate the interior and, although they would be barely visible, I really wanted to fill it with people.  Simple silhouettes would have probably sufficed but Dosch have a nice collection of very low res scans of real people so I used those.  Although they were low res, they did tax the system quite a bit by the time I placed them all and just converting all the materials to Maxwell format was a major task but it’s a nice subtle addition to the image.  The closeup interior image reveals their reckless behaviour on the balconies though! 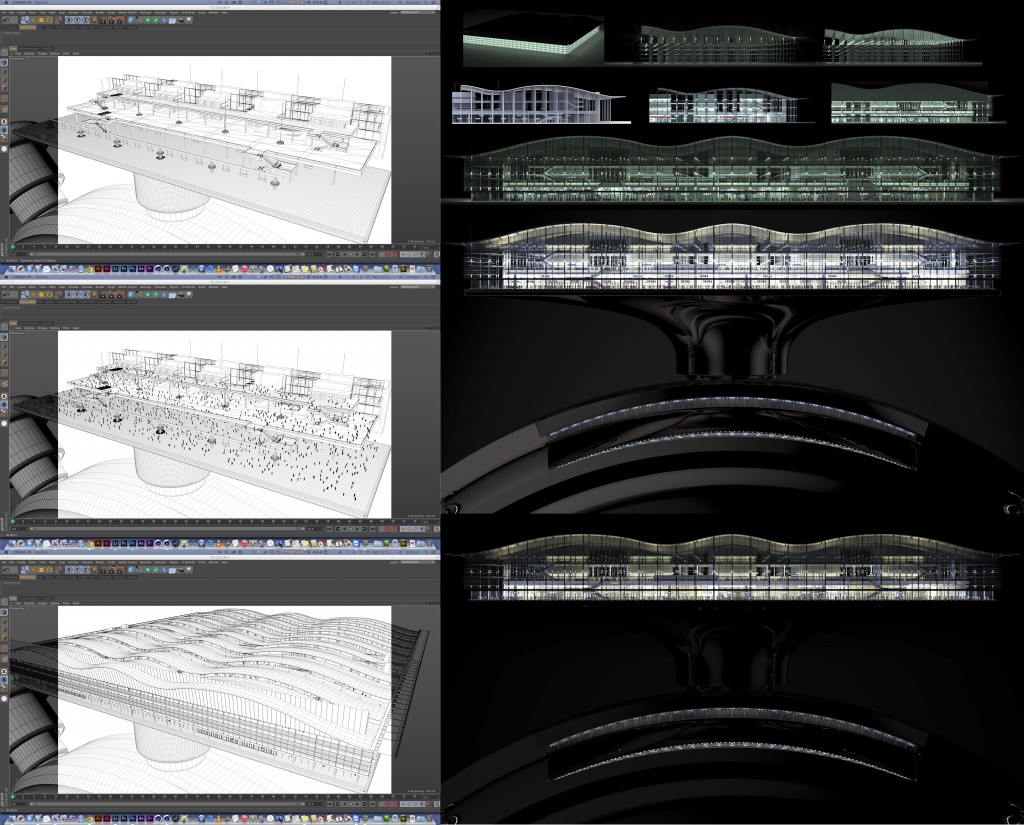 I also had to replace the stopwatch’s central button with a plinth to stand on the terminal which I built in Moi3d and imported to Cinema 4D for texturing and rendering via Maxwell.  I took the actual stopwatch from the shoot and created a simple model of it in Cinema 4D purely to experiment with how the light from the terminal might affect it and reflect into it.  Ultimately a lot of that was felt to be distracting so it went unused.  Then it was a matter of adding the hundreds of light fittings to pillars, ceilings, recesses etc. that would be the main visual element.  I also created several 32bit exr’s for the screen graphics so that they would hopefully contribute to the general glow.

This was an unusual project in that it wasn’t so much about rendering surfaces, it was all about the combination of lighting visible through the glass frontage. In that respect, Maxwell was ideal as its Multilight feature meant that one render gave me 6 different layers of lights. 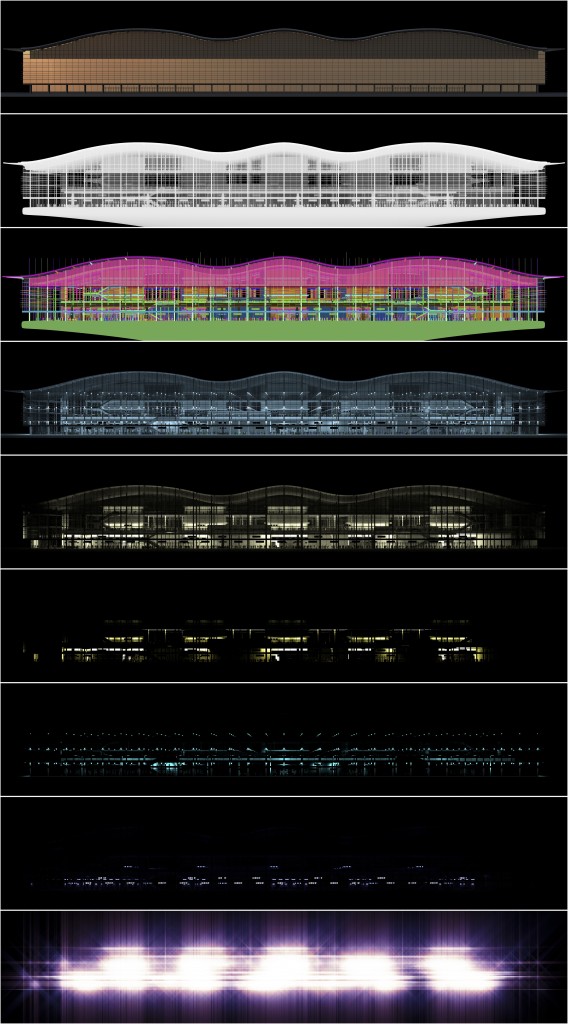 I imported these to After Effects as 32bit images and composited, adding more layers of glow and other effects to create the desired image.  I prefer to work with After Effects for the 32bit composite as it still works much better than Photoshop at this depth (why can we still not use curves in 32bit Photoshop files?).

I rendered out this result from After Effects at 16bit for further compositing to Johanna’s watch photography in Photoshop.  The final image was approximately 13000pixels square and you can get a good idea of the build progress from the animation.  It was around 80 hours of work spread over 2 months.  There are always lots of amendments and tweaks on a job like this but thanks to the creative team having a really tight brief and clear vision of what they wanted, it went very smoothly.

It was one of those jobs where I knew it would be taxing and I honestly wouldn’t have wanted to do it in any package other than Maxwell.

Maxwell Render Team: Thank you, Richard, for sharing your story with us and congrats on a great project! 🙂

If you also want to share your work done in Maxwell, get in touch here.